Home Editor's Pick KL Summit : Be Proactive or Be A Pessimist? 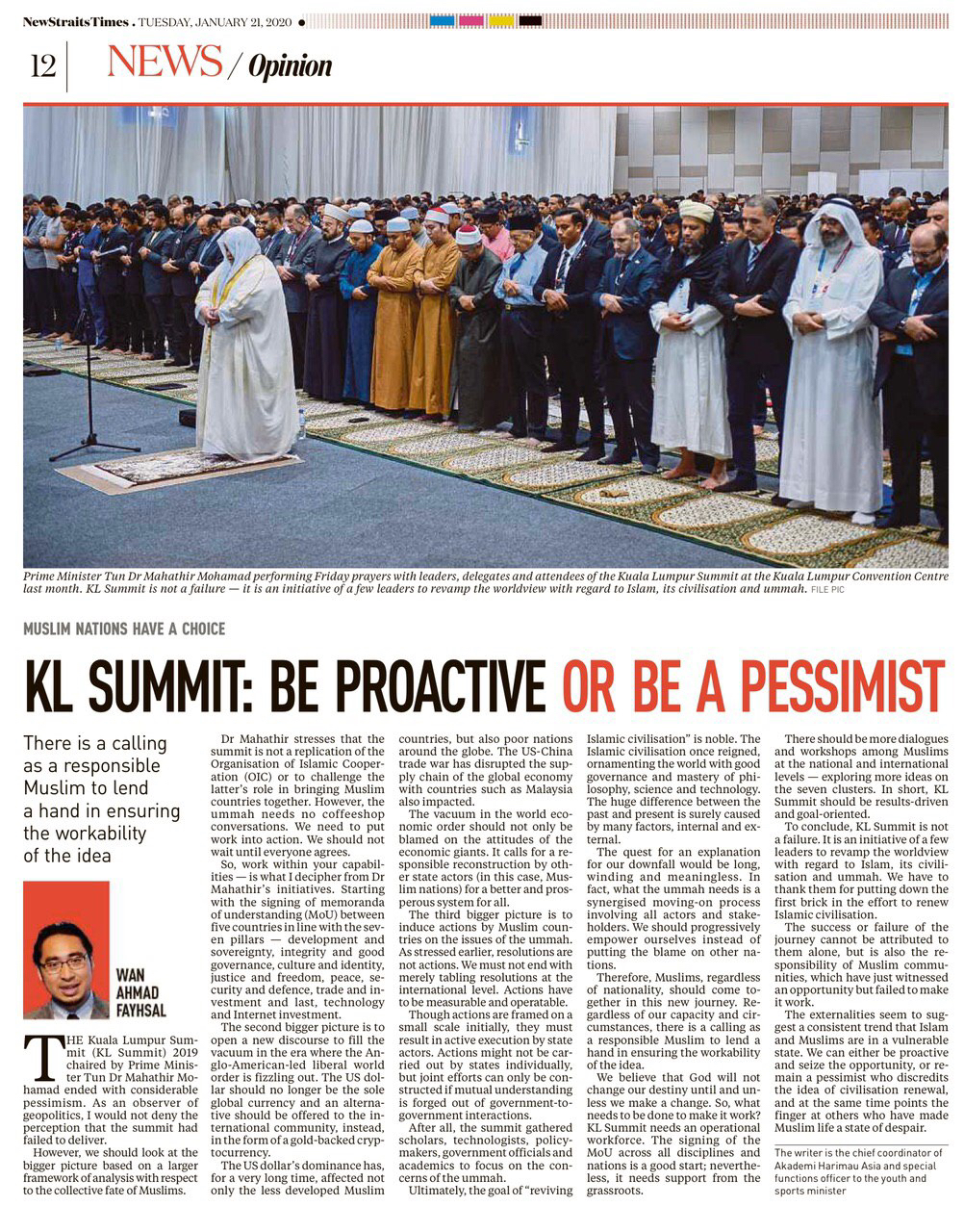 Prime Minister Tun Dr Mahathir Mohamad performing Friday prayers with leaders, delegates and attendees of the Kuala Lumpur Summit at the Kuala Lumpur Convention Centre last month. KL Summit is not a failure — it is an initiative of a few leaders to revamp the worldview with regard to Islam, its civilisation and ummah. NSTP/ASYRAF HAMZAH ASYRAF HAMZAH

THE Kuala Lumpur Summit (KL Summit) 2019 chaired by Prime Minister Tun Dr Mahathir Mohamad ended with considerable pessimism. As an observer of geopolitics, I would not deny the perception that the summit had failed to deliver.

However, we should look at the bigger picture based on a larger framework of analysis with respect to the collective fate of Muslims.

Dr Mahathir stresses that the summit is not a replication of the Organisation of Islamic Cooperation (OIC) or to challenge the latter’s role in bringing Muslim countries together. However, the ummah needs no coffeeshop conversations. We need to put work into action. We should not wait until everyone agrees.

So, work within your capabilities — is what I decipher from Dr Mahathir’s initiatives. Starting with the signing of memoranda of understanding (MoU) between five countries in line with the seven pillars — development and sovereignty, integrity and good governance, culture and identity, justice and freedom, peace, security and defence, trade and investment and last, technology and Internet investment.

The second bigger picture is to open a new discourse to fill the vacuum in the era where the Anglo-American-led liberal world order is fizzling out. The US dollar should no longer be the sole global currency and an alternative should be offered to the international community, instead, in the form of a gold-backed cryptocurrency.

The US dollar’s dominance has, for a very long time, affected not only the less developed Muslim countries, but also poor nations around the globe. The US-China trade war has disrupted the supply chain of the global economy with countries such as Malaysia also impacted.

The vacuum in the world economic order should not only be blamed on the attitudes of the economic giants. It calls for a responsible reconstruction by other state actors (in this case, Muslim nations) for a better and prosperous system for all.

The third bigger picture is to induce actions by Muslim countries on the issues of the ummah. As stressed earlier, resolutions are not actions. We must not end with merely tabling resolutions at the international level. Actions have to be measurable and operatable.

Though actions are framed on a small scale initially, they must result in active execution by state actors. Actions might not be carried out by states individually, but joint efforts can only be constructed if mutual understanding is forged out of government-to-government interactions.

After all, the summit gathered scholars, technologists, policymakers, government officials and academics to focus on the concerns of the ummah.

Ultimately, the goal of “reviving Islamic civilisation” is noble. The Islamic civilisation once reigned, ornamenting the world with good governance and mastery of philosophy, science and technology. The huge difference between the past and present is surely caused by many factors, internal and external.

The quest for an explanation for our downfall would be long, winding and meaningless. In fact, what the ummah needs is a synergised moving-on process involving all actors and stakeholders. We should progressively empower ourselves instead of putting the blame on other nations.

Therefore, Muslims, regardless of nationality, should come together in this new journey. Regardless of our capacity and circumstances, there is a calling as
a responsible Muslim to lend a hand in ensuring the workability of the idea.

We believe that God will not change our destiny until and unless we make a change. So, what needs to be done to make it work? KL Summit needs an operational workforce. The signing of the MoU across all disciplines and nations is a good start; nevertheless, it needs support from the grassroots.

There should be more dialogues and workshops among Muslims at the national and international levels — exploring more ideas on the seven clusters. In short, KL Summit should be results-driven and goal-oriented.

To conclude, KL Summit is not a failure. It is an initiative of a few leaders to revamp the worldview with regard to Islam, its civilisation and ummah. We have to thank them for putting down the first brick in the effort to renew Islamic civilisation.

The success or failure of the journey cannot be attributed to them alone, but is also the responsibility of Muslim communities, which have just witnessed an opportunity but failed to make it work.

The externalities seem to suggest a consistent trend that Islam and Muslims are in a vulnerable state. We can either be proactive and seize the opportunity, or remain a pessimist who discredits the idea of civilisation renewal, and at the same time points the finger at others who have made Muslim life a state of despair.

The writer is the chief coordinator of Akademi Harimau Asia and currently working as Special Functions Officer to the Minister of Youth and Sports.